The Sound of Silence – Is No Brentford Noise Good Noise?

Beesotted’s Lewis Holmes provides a fantastic explanation as to why he’s embracing much of the continuing press apathy to Brentford’s top trump scalps and offers a different perspective to Jim Levack’s excellent article earlier in the week.

Hello darkness, my old friend. Football fans love a grumble, even at the happiest of times. Over the last couple of days, you could peruse the socials and find Arsenal fans kicking off over various perceived biases, despite being eight points clear at the top of the league. And despite battering the mighty Liverpool like Ivan Drago smashed Apollo Creed, you only have to scratch the euphoric glow (I dunno about you, but I’ve still got the warm and fuzzies on Thursday) and you’ll come across Brentford faithful having a good old mutter about the lack of recognition our little team gets for being, well, frankly superb.

The latest bout of apparent disrespect had me reaching for the keyboard this morning before I’d even finished my Shreddies. A fair bit of noise because we were last on Match of the Day. But we were the ‘Friday night fixture’ of this most recent round of games. First ones up. That game is invariably last on Match of the Day because there’s already been days of chit chat about it; the world spins for literally every single one of us kids, we can’t change that fact. We weren’t last on because of big club bias or Gary Lineker’s palpable jealousy of Thomas Frank’s barnet, we were last on because of the passage of time. I will never understand gripes about the Match of the Day running order, it’s been set for decades: unless there’s a massive upset it goes title chasers, relegation fodder, everybody else, Friday night. It was ever thus.

I do sort of get the wider complaints. We have been majestic against three Premier League titans this season, and on all three occasions the narrative has been about how pony the opposition was, rather than the plain fact that Brentford were brilliant. There’s a few voices bigging up the Bees, but mainly we’ve got empty platitudes and a few patronising pats on the head. The one and only Jim Levack detailed it in an excellent piece a couple of days ago. Now, far be it from me to step to Jim Levack on anything (honestly, I would never!), but as one of life’s eternal optimists, I actually think it’s good. In fact, I think it’s great.

The common refrain throughout our climb up the Championship was “Under the radar.” The Land of the Sleeping Giants underestimated Brentford all the way up until that last glorious season, when all but the most furiously Don Goodman-esque thinkers could see the writing on the wall. All those Premier League relics – teams like Middlesborough; managers like Steve Bruce, all of South Wales, the noisy neighbours from the Bush – all were smote before us as we reached the top. All left dazed, perplexed, bruised at the fact that this tiny club had overtaken them so comprehensively. And the whole way us fans, the people who knew the truth of what was happening, we leaned into the situation and gleefully chanted about being a bus stop in Hounslow.

I don’t see why the status quo should change now we’ve got our feet under the top table. I don’t want Jurgen Klopp purring over our playing style or congratulating Frank on his devastatingly effective tactics, I want him pissed off and moaning. I don’t want hacks at The Daily Mail or The Sun tossing off an 800-word puff piece, I want them scratching their heads and continuing to not get it. I don’t want West Ham fans nodding admiringly, I want them glaring at us across London. I want to feel the bitterness, the confusion, the sheer jealousy. Because to my mind, the longer this goes on, the longer we keep this amazing group of individuals together.

We’ve got the third best striker in the country playing in our red and white. Behind Sir Harold Hotspur and Erling Haaland (a guy who plays like he was grown in a lab), is a Brentford striker. Just typing that sentence makes me so proud. But with all the praise Ivan Toney rightly receives, comes inevitable attention. If he hadn’t had a little digital Ray Winstone as his guiding light for those unfortunate three or four years, every single clickbait bollocks generator would fill their Januarys linking Ivan Toney to half the Premier League. We saw it last summer: Chelsea admire striker, Manchester United ‘eye’ Ronaldo replacement, Leeds fancy ex-Peterborough starlet (sure thing boys, I fancy Ana de Armas but let’s all keep ourselves grounded). Reams and reams spaffed out and 90% of it is pure bullshit. Now, that’s just search engine optimisation at work, and I certainly don’t want to go back to the days of three lines in the League Two round up column. But the more ‘real’ journalists start shining a light on us, the more their clickbaity brethren jump on the bandwagon, the more the Twitter ITKs fart out ‘scoops’ in search of digital dopamine.

All of that just leads to The Many-Headed Fanbeast clamouring for our brightest and best. The blood money barons at Newcastle, the Bond villain at Chelsea, the lunatic at Everton, even the relative good guys at Leicester or Villa, none of them are immune to the noise from their respective fanbases. Don’t kid yourselves that just because we’re currently above some of those clubs in the league, we’re safe from their advances. When it comes to the pure finances, the actual Premier League food chain, we are still very much the BFG in a land of Fleshlumpeaters. That is surely at least half the reason that Thomas Frank’s Christmas contract extension was such a hefty one. He deserves every day and every penny of those extra four and a half years, but at the same time Matthew Benham and Phil Giles also have to futureproof the club against the vultures.

Look at how quickly Chelsea jumped for Graham Potter, Brighton were really clicking and then out of nowhere it was new boss time. It looks like it’s worked for them this time, but every new start is a gamble. Do you really want the aggro of a new guy at the Gtech? Imagine the brouhaha if Thomas left, we brought in a newbie, and then that guy starts with one win in ten. You’d be spitting feathers all over your timeline, and we both know it. It extends to the players too. Toney and Raya get the plaudits, but alongside them Henry, Norgaard, Jensen, Pinnock, Mbuemo are a solid group who have been racking up solid performances on the regular for ages, yet still flying under the radar of all but the most astute of outside observers.

To mangle the phrase, no noise is good noise. Don’t get me wrong, on a micro level I love it. I will talk to admiring friends, family and colleagues about the meteoric rise of Brentford until the cows come home. But on a macro level, as part of the Premier League machine, I want everything just as it is. While we’re all having another Freed From Desire party, I want to see slack-jawed confusion and green-eyed envy from the opposition. We don’t need relics like Martin Samuel farting on about how great Brentford are, because we’ve got eyes in our heads. Underrated, underestimated, under the radar – for as long as we can be. We all know the truth; we watch this team week in week out. Up the fucking Bees! 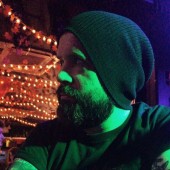 Brentford supporter since the mid-90s (I think, the 90s were a blur). Big fan of Rasmus Ankersen's attempts to take the emotion out of the game, but also a big fan of Alan McCormack's blood and thunder attempts to put it into each and every match. I'm prone to mangled metaphors, obscure movie references and inventive swearing.