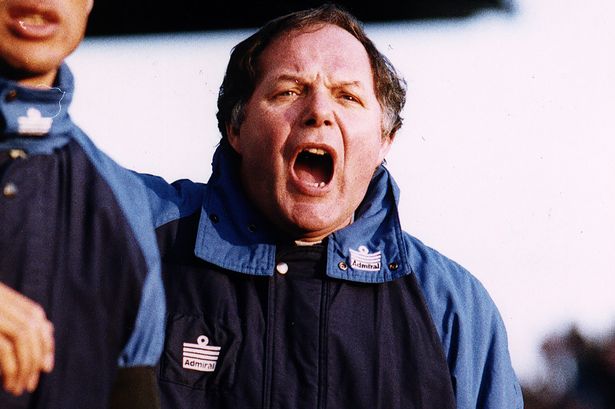 Times must be tough for poor old Barry Fry these days.

Everywhere you look the former Birmingham City chief once regarded as a clown in the Second City and beyond is desperately touting a player he doesn’t even own.

Within the last week, the 76-year-old Peterborough Director of Football has happily fed the clickbait sites with his unique brand of ‘wisdom’.

Let’s not forget that this is the same bloke whose idea of building a successful squad was to buy every player any of his rivals were interested in.

He did have an eye for talent he could develop, few can dispute that. And the proof is alive and well in red and white stripes in Ivan Toney.

But it was a standing joke among Birmingham’s football journalists that when Trevor Francis took over from football’s Arthur Daley at St Andrew’s he opened a cupboard at the training ground… and two more players fell out.

Fry has always been regarded as a bit of a comedy figure, a caricature of himself, but his latest comments to the hordes of football writers who pass themselves off as journalists make him look dafter than ever.

In fact, I’m not sure who’s worse. The gibberish-spouting Fry or the idiots whose only skill is in luring people – myself included – to click on their copy by dint of a grossly misleading headline.

Much of the gossip-based rubbish reads as though it’s been penned by an eight-year-old… a far cry from the days when sports hacks actually operated by developing a mutual trust with the club they covered.

It saddens me deeply that sites whose names I won’t mention feed like piranhas on any morsel of made-up nonsense and try to turn it into a story.

It used to be called ‘kite-flying’ but used to be done for a reason back in the day, to coax the bigger story out.

Now it’s just a Chinese whisper machine, where George Smith – they usually have generic names like that ­– picks up on a random thought of even the most fringe football pundit and turns it into a concrete tale.

The others who have missed out on the “Exclusive” aren’t bothered. They simply top and tail the original story, give it a new headline even if it’s grossly misleading and it’s job done. Very sad that a generation of wannabe writers think that’s journalism.

Of course, newspapers other than the truly local or regional are the past now and have been replaced by websites like Beesotted who now trust and are trusted by the club.

Good thing too, otherwise there’d be no two-way dialogue, no accountability.

It will be interesting to see whether media operators such as Reach (Football.London), whose pursuit of clicks is all consuming, are now all over Brentford like a rash.

Watch this space and expect ’10 things you never knew about the Bees’ type content very soon.

I digress though. There’s no smoke without fire and characters like Fry must share the blame for his latest outbursts which appear to be part of a crude scheme to kick start Toney’s move away from TW8 and pay for his descent into retirement with Posh’s share of the proceeds.

He’s variously quoted as saying: “I still think teams like Everton and even Chelsea are interested in him. I know Chelsea are looking at the top range of centre-forwards, but I know they’ve watched him and like him, and if they don’t get A, B, and C, who knows?”

Who knows indeed Barry? Certainly not you, that’s for sure.

but he also performs – Deschamps
“Then I expect Ivan to go for £40 million, £45 million, £50 million, but now he’s got them in the Premier League, only the top clubs could afford him.”

So it’s a non-story then Barry?

Just as this guff was still incensing me Bazza pops up again, this time hailing Ivan as a replacement for Harry Kane at Spurs.

Fry has always been the master of the absurd and for decades we’ve laughed along and the football world has taken much of his musings with a pinch of salt.

Now he has an audience waiting with pens poised to bend his every word, and he’s loving it. The circus might have left town but Barry is still very much the clown.

Incidentally I read somewhere that the world’s greatest player flew over the new stadium before landing at Heathrow recently.

So clearly it’s only a matter of time before “Messi is Brentford-bound” has us clicking to get the numbers up.