Today we commemorate the anniversary of one of Brentford’s most famous victories – the War Cup Final win over Portsmouth that took place at a packed Wembley Stadium on Saturday, 30 May, 1942. The club’s iconic manager, Harry Curtis, described the day, and leading his players out onto the pitch, as his proudest moment and it is testament to the achievement that we are still talking about the match 78 years later. What follows are the memories of  man of the match double goalscorer Leslie Smith, who relives his Cup Final day, as well as playing for England. 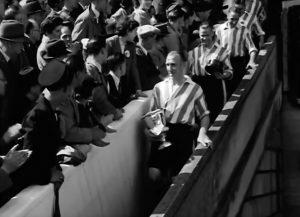 I received my first great honour in 1939 when I was chosen to go on tour with England, who had matches arranged with Italy, Jugoslavia and Romania. Eddie Hapgood was then the recognised skipper and the team included such fine players as Stanley Matthews, Joe Mercer, Stan Cullis, Ken Willingham, Willie Hall, Tommy Lawton, Len Goulden, Frank Broome, Vic Woodley, George Male, Will Copping and Bill Morris. I was the ‘baby’ of the side and to make my first overseas trip in such company was a tremendous honour.

Our first match came in May 1939, against Italy in Milan, and we did extremely well to draw 2-2 – Tommy Lawton and Willie Hall scored the goals. I did not play in this match, nor in the next against Yugoslavia at Belgrade, which we lost 2-1. My big chance came in the final game against Romania in Bucharest. Matthews did not have a particularly good game so they switched Frank Broome to the right and brought me in on the left wing.

Len Goulden and Don Welsh scored to give us a 2-0 victory and I remember that I was so nervous at the start that I never saw the first four passes given to me by Len Goulden. Fortunately, I managed to settle down and with so many experienced players helping me I could not go far wrong.

That was the last full international England were to play before the war. When hostilities began that September, all the Brentford staff were recruited into the Civil Defence. I was called into the Police with whom I spent six months before joining the RAF on my birthday the following March, and I had one interesting experience during my short stay with them.

I was on night duty when I saw a shadowy figure drifting down the other side of the road. When I shone my torch, the figure broke into a run. I followed and, as a winger, I thought I could move a bit, but I was hopelessly outdistanced by a phantom figure. The next day we received a call for the local hospital saying that an inmate wearing pyjamas and slippers had vanished the previous evening. Whether he was the same figure I had seen I do not know, but I still have my suspicions.

On being called up to the RAF I was posted to Hornchurch, where my immediate superior officer was the then British heavy-weight boxing champion, Len Harvey, and my group officer was Bernard Joy, the Arsenal centre-half, now the soccer writer for a London evening newspaper. Len and I struck up an immediate friendship and later we were to get into a number of adventures and a few scrapes.

I remember that on one occasion Brentford had to play Portsmouth in the London War Cup Final at Wembley. Len and I decided to travel by car, but when within a few miles of Wembley it broke down. We were in a spot as there was little time before kick-off, so we phoned the local police station and explained the situation. They sent out a police car and rushed us to Wembley, past all the traffic with sirens blaring.

When we arrived I dashed to the dressing room to find Harry Curtis tearing his hair out and my understudy already stripped to play. I got ready just in time to rush out with the others to be presented to King Haakon of Norway, then in exile in this country, and who was to present the trophy.

Five minutes after the game started, Jimmy Guthrie, the Portsmouth right-half, collided with his right back, and I was left with an easy chance to score. Even then I mishit the ball, but it went into the net. Guthrie missed a great chance of equalising from a penalty, then four minutes from time, I scored a goal I will never forget. It was one in a lifetime.

To be quite honest, I had no intention of scoring when I received the ball. I knew the final whistle was not far off, so my main idea was to keep hold of the ball and kill time. I set off on a leisurely dribble towards the corner flag, and achieved my object and then began to dribble in towards the goal, cutting inside my opponents. I reached the penalty area and suddenly realised that I had a chance of scoring. So I hit the ball with my right and it entered the net, beating Walker the Portsmouth goalkeeper all the way.

The crowd went mad. I realised afterwards that it must have looked a picture goal. Headlines described the game as ‘Leslie Smith’­s Match’. Certainly it was one I will never forget.

To commemorate the anniversary of the club’s legendary Wembley win on May 30th 1942, the ‘Golden Era of Brentford’ book is available for just £19.42 (usually £32.50) for one week only while stocks last.

YOU CAN BUY IT HERE http://bit.ly/3d2ObDv